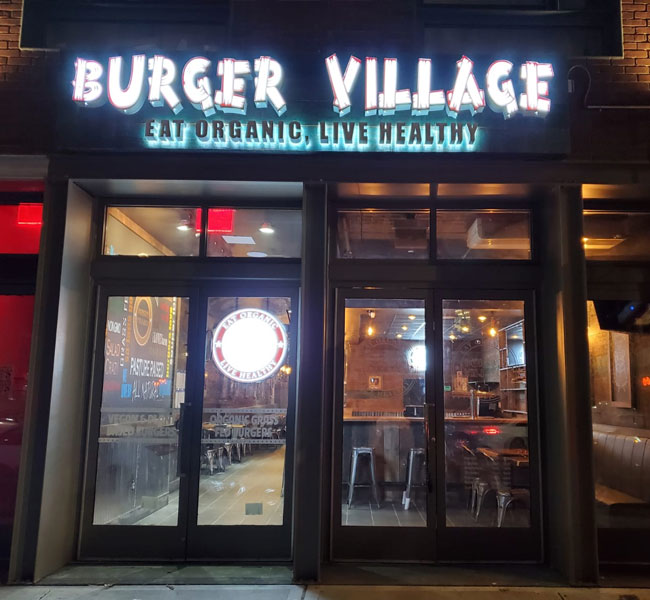 Burger Village, a restaurant specializing in exotic and organic burgers, is all set to open up another new outlet in Astoria Queens, New York with a highly anticipated grand opening event. The restaurant opened its first location in Great Neck, NY, in 2013 by a group of Long Island brothers - Sam, Nick, Vick, and Ravi. Since then Burger Village has received immense love and appreciation from its enthusiastic following.

The original four Burger Village locations are right here in New York, and the newest location will be the first in Queens. There are additional locations in California and Canada. The Astoria Queens location is just west of the New York City borough of Queens at 40-17 Broadway, Astoria, NY.

The Astoria Queens location will have its Grand Opening on November 30th, and will hold a mask giveaway, and give out free fries for everyone who shares their experience on social media. The grand opening will also feature $5 off for the 1st 100 customers and 10% off for everyone else on Grand Opening day.

Vegetarian and vegan food lovers, as well as diners with food allergies will love the many offerings of gluten-free, peanut-free, and vegan choices.

Nick Yadav, the company’s CEO, said that the expansion to Astoria Queens is part of the brand’s overall franchise development plans for this year. He adds, “Acknowledging the current economic condition, we want to create jobs and do our part to revitalize the economy. Our expansion plans allow us to create 15-20 full and part-time jobs for this new location.”

We strive to serve organic, all natural, antibiotic and hormone free products in the form of juicy burgers, fresh hand cut fries, salads, soups, shakes and other beverages along with delicious desserts.

Get additional information about Burger Village. Submit your information now and a franchise representative will be in touch.

Salads from Burger Village are an amazing tasting, healthy option for lunch or dinner.

There is nothing like a Specialty Burger from Burger Village with our signature toppings.

We use the freshest, organic ingredients to make the most delicious shakes imaginable.